The WRMD team is currently working to publish more information on how best to use WRMD. It is one thing to transition to using a whole new system. It is quite another to get to the point of using it appropriately.

In the past I have seen some very creative uses of WRMD that made sense, however they did not work with the use of a database. When WRMD is used appropriately it can be a powerful tool, when used a little to creatively it will muddle up your data and analytics. Here are a few reminders of appropriate use that I find are most commonly done a little, too creatively.

Choose a Common Name from the drop down menu 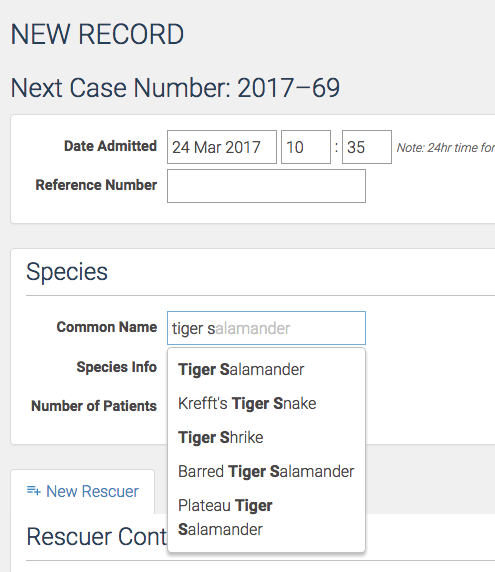 This one correction alone, can make the biggest difference to your data. I have Blogged a few times about the importance of species identification, The Issue with Common Names, February WRMD Update. In the background, WRMD has nearly every species that could possibly be brought into wildlife rehabilitation, globally. We have imported the IUCN Red List to WRMD, which list almost every species and its status, whether it is Least Threatened to Extinct (we didn’t import extinct animals). In a few cases, we have found species not on our list, and we added them as soon as we found out about them. Along with this import we also added the most commonly recognized Common Names for that species. That is why sometimes you can have both Common Pigeon and Rock Dove. In the background they are the same species and the first Common Name used, will be the name used in any reports or analytics.

Please identify your patients and use the Common Name from the drop down menu or your data will be inaccurate. Sometimes you have to type it in completely in order to see it on the drop down. If you can’t find it, message us so we can look into it.

Record ages in the field for Age

On several occasions I have seen Duckling, Fawn or even Baby Bird as a Common Name. These are not Common Names. It is slang for the age of a species. The database will pretty much ignore this Common Name and your data will be completely off. You need to record the Common Name as Mallard, Mule Deer or House Finch and then in the Initial Exam tab you can record the age.

Do not use an age term as a Common Name.

Each patients needs it’s own record 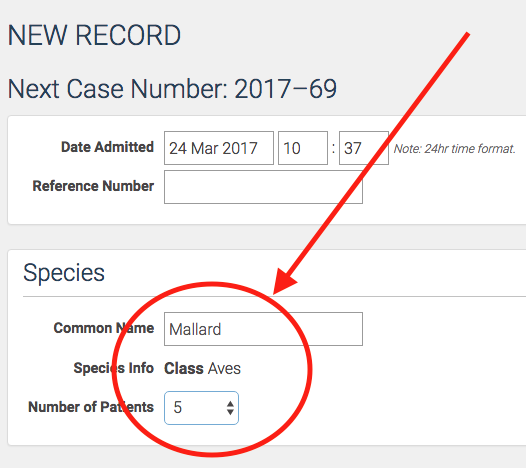 Something else I have seen that really kinda hurts, is when a Common Name is recorded as ducklings x5. This defeats the whole purpose of using a database. Not only can the Common Name not be identified but you are losing your overall numbers. Right below the Common Name field there is a field for Number of Patients, it is really easy to create 5 records. What happens if 2 of those ducklings die and 3 are released. How do you record that? How does that get translated on your State Report or the Federal Report? There are locations for all that information within WRMD, there is not need to jumble it up and make your data of no use to you.

Each patient needs it’s own record.

A few times I have seen in Common Name (Education Barn Owl) or (Billy Bob the Barn Owl). Well, this is much like everything I have mentioned above. There is a location for the Name of an animal in the Cage Card, specifically for education animals and the large secret group or rehabbers that name their patients… For Resident patients they should maintain a pending Disposition and in the Location box you should record them as Resident within Holding at.

We have been told that one of the best things about WRMD is it’s ease of use. The compromise of allowing WRMD to be easy to use, we lose the ability to control how it is used. We think it is more important to have a system people can easily use then to be very strict and rigid on how it is used. Only through training and outreach can we eventually help people use it more efficiently, for their own benefit.