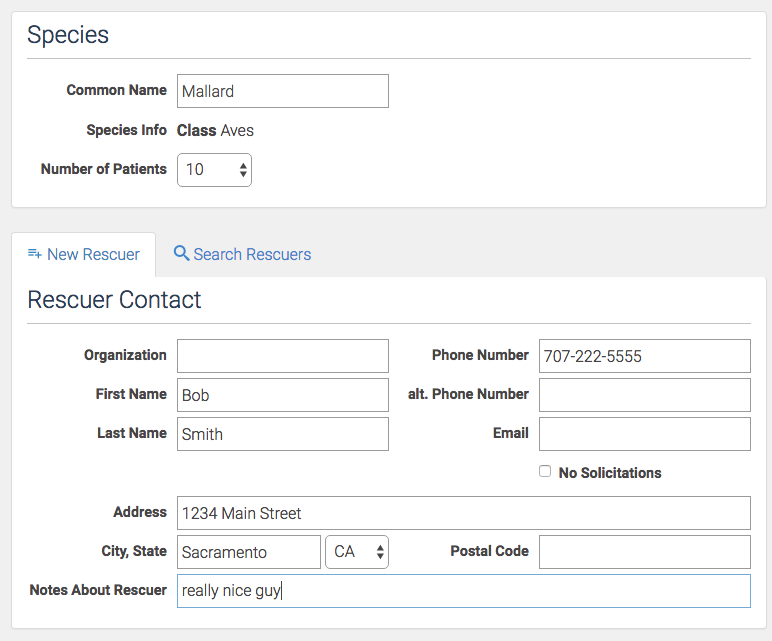 We added a tutorial video on exporting a record from Wildlife Rehabilitation MD. There are three distinct ways to export records; 1) exporting all records 2) exporting a subset of records and 3) exporting one individual record. All three ways are simple and effortless. Watch it and learn.

On October 1, 2013 we had a training at the Monterey CA SPCA to help their staff and volunteers become familiar with Wildlife Rehabilitation MD. This video is raw and unpolished so that you can also follow along with the questions and conversations.

We’ve just released a significant update that is designed to help manage your rescues. This was something that was meant to be part of Wildlife Rehabilitation MD from the beginning however it just kept slipping through the cracks. Basically there are two major parts to this update.

1. You can now reuse existing rescuers when creating a new record.

2. You can reconcile multiple rescuers into one. You may have rescuers in your database that have brought in multiple animals, however those rescuers have been entered into the database more than once. To keep a better history and analytics of what animals a rescuer has brought in, it’s a good idea to match them up and eliminate duplication.

For a complete explanation of how to do all this you can watch this tutorial video.

We think that all the bugs have been worked out but of course if you find any then let us know by sending some feedback. Some accounts have waited a while (and patiently) for this update. Enjoy!

We’ve added two more tutorial videos to the Tutorial and Demos page, one on managing your account and the other about deleting a record.

Before jumping straight into your account and creating your new records, it’s a good idea to visit the settings area of Wildlife Rehabilitation MD. You should check your account profile, image and veterinary information. You can also create more users for your account and assign them permission levels based on your liking.

You may also update the security features for your account as well as activate any extensions that you may wish to use. Some extensions offer settings specific to them, so after you activate an extension look for a settings link for it.

Cases in Wildlife Rehabilitation MD can not be deleted.

If you have a case that you would like to “delete”, the better option is to write a new case over the mistaken case. For example: replace the values in the fields of the mistaken case with values that match your new case. Be sure to change the species if needed.