Happy New Year! Every new year we make a few updates and changes. This year we are only making a few updates. This is because we are working on a newer version of WRMD that will incorporate many of our users’ fabulous ideas. We are not sure when it will be ready, but Fall 2015 we will start to introduce it and open it up for discussion. I have had a few glimpses of it and it is really nice. Best of all it will be easily accessible on your mobile devices. Yeah!

The reasons for the following updates are due to our attempt to make field meanings, more clear. We have noticed that our users will use different fields for the same purposes. This doesn’t really help if we want to compare and analyze data. It is also our attempt at streamlining the system to be more effective in using standardized terminology. 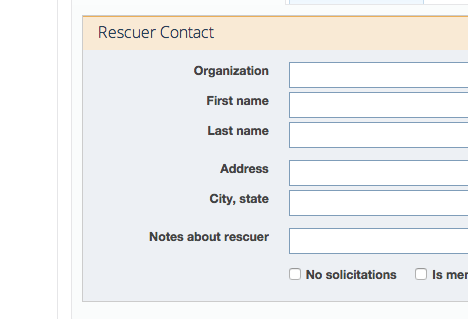 On the “New Record” screen in the “Rescuer Contact Information” box there was a field for “Notes”. This field was intended to be used only for information about the rescuer, such as “Watch out crazy person” or “They want to be part of the release”… We have changed the name to “Notes about rescuer”

This is the big one. It is also on the “New Record” screen, but in the “Intake” box.  This is big not because of the name change but because of the decision on the use of the field. This field is to be used as what were the reasons for the animal being captured and brought in. This is where your cat caught, hit window, shot, electrocuted, orphaned, etc. need to go. The rescuer’s observervations can also go here as well, but most importantly we want the “Reason for admission” to go in this field. This field is the wildlife rehabilitators best weapon for policy changes, please fill it out. 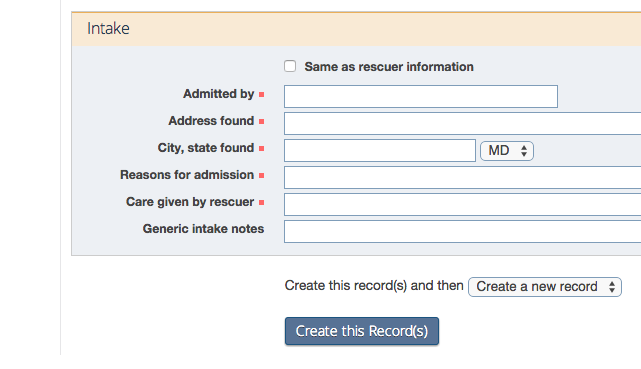 In the “Intake” box there was a field for “What fed by rescuer”. We realized that that was unclear. What information should go here, is all care that the finder administered to the animal. This would include fluids and medical care, not just food. So, we changed the phrase to “Care given by rescuer” in the hopes that it would be more clear.

We will at some point delete this field, it is well… too generic. Any data in this field will not be lost, but hopefully moved to another appropriate field. It would be best to stop using it completely, but since some people do we didn’t want to get rid of it right away.

On the federal report there is a section called “Nature of Injury” In our discussions with, well everybody, we don’t really know what its intended purpose is. Is this where you put “Fx L femur”??? or is it cat caught??? So, we decided to ask the feds themselves. This is the email we got back.

“That’s a great question. I took a look at the annual report form, and in some places it asks for “Cause/Nature of Injury.”  I would interpret the areas that ask for “cause” as asking for what created the injury (cat, hit by car, shot, electrocuted, etc.) and I would interpret the areas asking for the “nature of injury” as asking for the type of injury (broken wing, damaged feathers, emaciated, etc.).  It probably would have been easier to understand if we had included two separate columns, one for the cause of the injury, and another for the type of injury.”

Alright, so what we are going to do is use the “Reason for admission” as the cause and the “Nature of Injury” is the clinical signs. Basically, it is the initial exam. At some point we can get completely on the same page as the feds, but for now at least we rehabbers can all be on the same page.

Lastly I would like to talk about “Keywords”. I think that this is the forgotten field. This field is intended to be used when you want to add on particular information about that animal that can later be searched. For example you could put the true reasons for admission here that might differ from what was written down on the “New Record” screen. It could be used to identify a common disease that the animal has such as trich, mycoplasma, distemper or rabies. It could be used for anything that helps you distinguish a particular individual.

As always, if you have any questions or comments, we are all ears!!! [email protected].