Nearly six years ago, when we first set out to create WRMD, we set a few priority goals. We first wanted to provide wildlife rehabilitators with an amazing, simple, and free database to help them with their daily record keeping needs. We also wanted to create an interface to aggregate data across multiple organizations and to allow for the entire community to benefit from their shared data. We wanted a tool that could help wildlife rehabilitators identify emerging wildlife trends and communicate those trends out to a network of rehabilitators and other wildlife professionals. We are proud to introduce the beta release of WRMD Investigator and its pilot program Enhanced Wildlife Disease Surveillance in California!

Thank you once again to those centers who indicated their willingness to partner with us on the Enhanced Wildlife Disease Surveillance project! This week, we are launching the enhanced wildlife disease surveillance system using the new surveillance platform in WRMD.

This system is the first of its kind, to facilitate real-time monitoring of wildlife diseases and mortality events in California wildlife. Information arising from the enhanced surveillance will be made available to the network of collaborating wildlife rehabilitation centers in order to increase awareness of wildlife health events throughout the state.

The new platform to be used for the project aggregates data from our network of partner centers on a weekly basis and detects and alerts investigators to potential unusual wildlife health events (e.g., disease outbreaks). The data to be aggregated from participating centers includes admission date, reason for admission, location found, diagnosis, age, disposition, and clinical signs on initial exam. 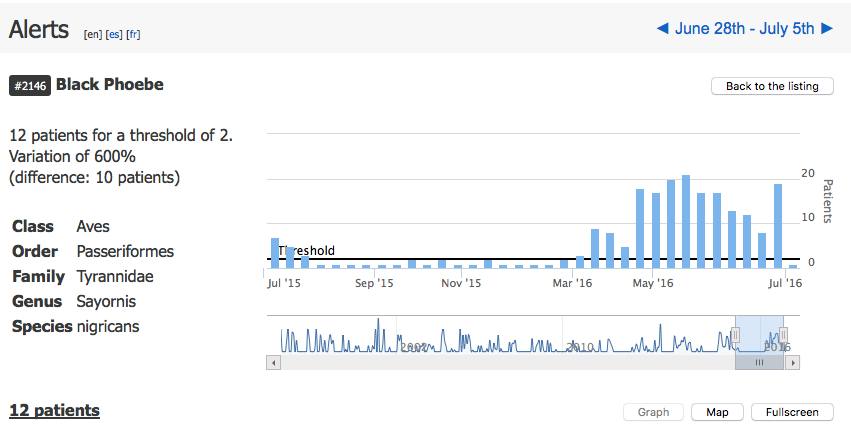 Depending on the circumstances of the alert, the Wildlife Health Center and CDFW will be reaching out to partner centers to follow-up with collaborative investigations. Please note that this project doesn’t require extra effort for centers and personally identifiable information and information related to treatment/management of cases is not accessible to investigators or partners.

If your center is interested in participating in the study, it is not too late to join our list of partners. If interested, please email Devin at [email protected].

Threats to wild animals are increasing at an alarming rate. There is a critical need for increased monitoring of impacts of these threats on wildlife species, especially species that are difficult to monitor. In California, centers collectively rehabilitate ~ 500 different species of wild animals annually and are uniquely positioned to contribute significant information about threats to a diverse range of wildlife species in the state!

Thank you for your support and please let us know if your center is interested in participating in the study!

First off, we would like to thank all our users and their flexibility in adapting their organization to use Wildlife Rehabilitation MD. From our travels to other facilities we have seen many different ways to record and disseminate information. It is not easy to change procedures within any wildlife rehabilitation organization, yet our users have done it! Wildlife will benefit greatly, from your actions.

One of our goals has been to incorporate the best ideas from what individuals and organizations have shared with us, and to add them into WRMD. We want to share with you what new features and upgrades are planned for WRMD. Below is our to do list for the next year. Our list is endless, but we are trying to keep to a development plan. Our hope  is to have accomplished many of the items before the end of 2014. Some features will be added very soon. Others will be added during the 2014-2015 change over.

Features and Upgrades to Come Sooner Than Later

Many of the above features will require user input before being adopted into WRMD. As we begin to work on a new feature we will be reaching out to our users for their input as well as presenting our ideas of how a new feature might work.

We continue to appreciate feedback from our users. If you think you have an amazing idea that would benefit WRMD and our community please do not hesitate to let us know.

The Clinical Wildlife Health Initiative (CWHI) is a group of wildlife rehabilitation hospitals across North America, organized to develop a list of agreed upon standardized terminology used to described the Circumstances of Admission, Clinical Signs and Diagnosis of wildlife rehabilitation patients. The CWHI was organized and chaired by The Raptor Center of the University of Minnesota College of Veterinary Medicine. Its creation was a collaborative effort of more than a dozen wildlife care and conservation organizations including Wildlife Center of Virginia (WCV), the creators of Wild-One.

How the CWHI is Organized

The CWHI is organized primarily into three main groups of terminology:

Within each group there are many subgroups of definition terms, some of which contain a third subgroup of terms. As you traverse the terms down the tree, the terms become more and more specific. The definitions only go at most three levels deep in order to simplify the selection of an appropriate term(s) to use.

The Status of the CWHI

Recently the University of Minnesota Raptor Center has begun hosting a series of conference calls to re-examine the existing terms and enhance the terminology. Organizations from across North American, including Wildlife Rehabilitation MD, are contributing to the cause.

We absolutely support the CWHI. We feel that regardless of which rehabilitation database one chooses, a standardized terminology shared by all is essential to the wildlife rehabilitation community’s growth. However, we also are realistic and know that rehabbers are short on staff, time, money and other resources. We don’t have the time to think about and choose the most appropriate term(s) for a case from lists within lists. We just want to write down observations and notes in sentences that make sense to us and our co-rehabers. Rehabilitators and veterinary staff that use Wildlife Rehabilitation MD really like the flexibility allowed by Wildlife Rehabilitation MD to describe the circumstances of admission, clinical signs and diagnosis of their patients in commonly used language or medical terminology. This creates a very interesting dilemma, we want standardized terminology, but we also need our record keeping to be quick and easy.

Imagine a scenario during the middle of summer when you’re admitting over 50 animals a day. You have a line of people out the door, each holding a box with a stressed-out suffering patient. This scenario isn’t that uncommon for wildlife rehabilitation centers throughout the country. Those people in line and especially the animals need to be taken care of as quickly as possible. Wildlife Rehabilitation MD was designed by people who have endured summers like this and made it a point to be able to admit our cases quickly and all on one screen. Using common language to describe why the animal(s) were brought to our facility, it is a much easier way to record information.

Part of the Problem

Online behavioral studies have shown repeatedly that while online, people loose interest quickly if the answers they are seeking are not immediate. Choosing from a list of dozens of terms can be time consuming and is akin to taking a survey. It’s human nature to want things to be quick and easy—once a survey taker loses interest they simply abandon the task or fudge the answers simply to get it finished. This would be disastrous and counter productive for standardized terminology’s cause.

Part of the Solution

All that said, we will also soon be including a list of the CWHI terms in Wildlife Rehabilitation MD so that if in fact you do want to choose the most appropriate term(s) you can.

The Next Steps for the CWHI and WRMD

As the University of Minnesota Raptor Center host more conference calls, terms are revised and important decisions are made, we’ll make sure to keep you posted on the progress. In time, all this hard work being conducted by rehabilitation hospitals across North America, as well as all the major wildlife rehabilitation databases, will have a tremendously positive impact on our community and the patients we serve. This is a very exciting time going forward for our profession!