For a very long time I (Devin) have been annoyed with how reports were created in WRMD. Starting from the layout of the Reports page, through the inability to customize reports for my own needs. Well, as of today all that is changing.

We are Excited to Release a New Reporting System into WRMD

This new reporting system has some very simple goals.

Finding a report should not be a chore. Your most commonly used reports should be on top of the list, so we created a feature for that purpose. Reports will now be listed in groups instead of being tiled all over the screen. And, to make your life easier, you can now star a report as a Favorite! By doing this, those reports will be put on top of the list. 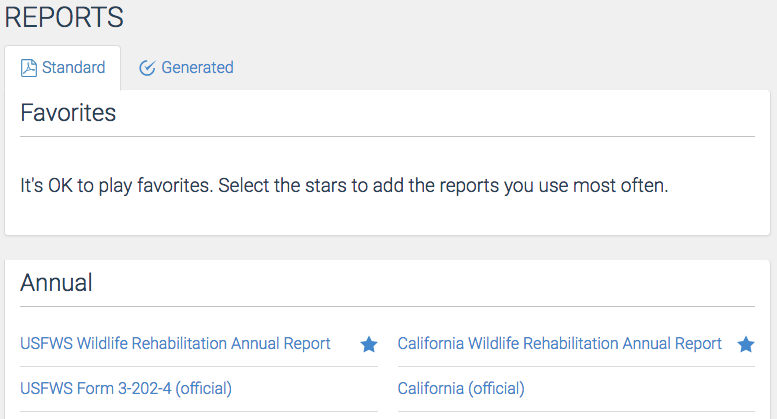 Reports can now be generated in multiple formats. The most basic format is just to see a preview of the report on your screen. When you click on a report you will be taken to a screen to preview the report and from there you can choose to print the report as a pdf or email the report. Now, many reports will have the ability to export the data directly to Excel!

The best part of the new reporting system are the filters. For a long time people have asked for the ability to adjust what a report, reports on. For example, limiting the date range to a specified time frame instead of an entire year or excluding certain species taxonomies if you don’t rehabilitate all classes.

A very simple example of this are the annual reports. Each annual report has a filter for a given year that it should report on.

Many reports will now have multiple filters like the Disposition by Species report! 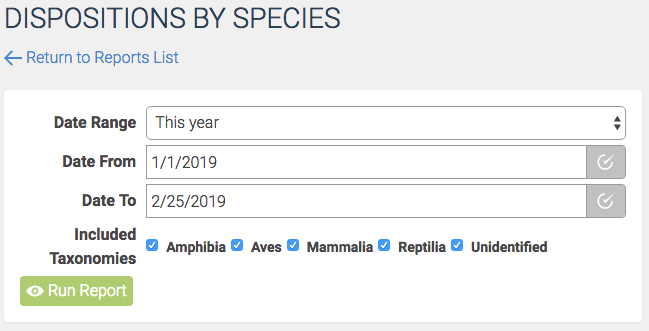 Once you create one of these reports it will be saved in the Generated Reports page for 14 days. If you think you want to permanently save this report, we suggest saving the PDF that is created to your computer.

Adding these filters were not just for our users, but also to help us manage the reports on the backend. Previously, we had to create multiple reports for what was essentially the same information but with slight variations. For example the Prescriptions Due report existed four times with slightly different pre-set filters. Now we can maintain one Prescriptions Due report but use the filters within the report itself to adjust what the report, reports on.

Customized Reports: This capability will allow you to save a specified search and then report on the specific dataset you wish to see. This will be available in the near future.

Filters you suggest: If there is a filter that you would like to see added to any of the reports, that would be a valuable addition, please let us know.

We hope you appreciate this update. It has been a lot of work for the past few months and we think it’s going to be the beginning of a wonderful and powerful new feature of WRMD. If you have any feedback or suggestions then please tell us either by email or in by clicking Ask for Help in WRMD.